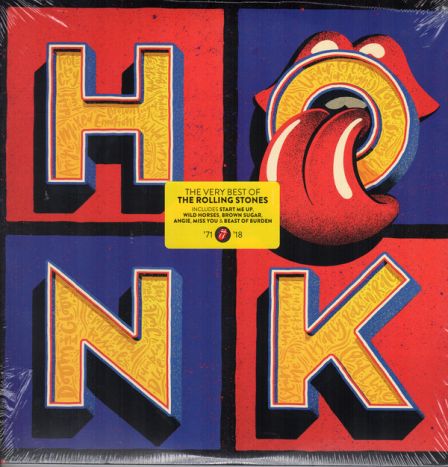 Sticker on front reads:
THE VERY BEST OF
THE ROLLING STONES
INCLUDES START ME UP,
WILD HORSES, BROWN SUGAR, ANGIE, MISS YOU & BEAST OF BURDEN
’71 ‘18

We get '70s standards such as Brown Sugar, Wild Horses, Tumbling Dice, Happy, Angie, It's Only Rock n' Roll and other choice cuts from the band's second decade.
Miss You, Beast of Burden, Emotional Rescue and Start Me Up are here too, but so are later releases from the '90s '00's and '10s.
Honk is the first Stones compilation to feature lots of choice cuts from later releases.
Albums such as Steel Wheels, Voodoo Lounge, Bridges to Babylon, A Bigger Bang and Blue And Lonesome are all well represented,