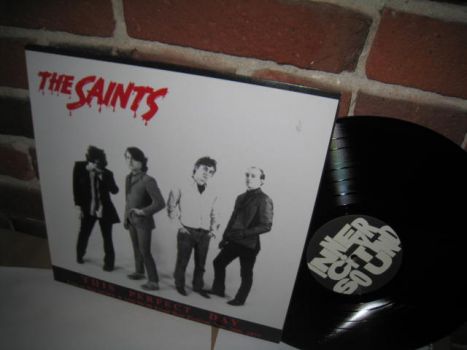 The Saints grew out of the Brisbane garage band Kid Galahad and the Eternals which featured vocalist Chris Bailey, guitarist Ed Kuepper and pianist come drummer Ivor Hay. They formed in 1973 and changed their name to the Saints a year later.
Like so many good things, The Saints began by accident rather than design.
Ed Kuepper, guitarist with Brisbanes original punk heart-stoppers the Saints, had left school and was working in a Brisbane warehouse for Melbourne-based independent label Astor Records. The label operated from the 1960s through to the early 1980s, experiencing early success with pioneering Australian garage bands the Loved Ones and Masters Apprentices.


Working for Astor was a critical postgraduate education for Kuepper. Not only did he get his hands on slabs of deleted singles, it helped him unlock the mystery of the recording process. The Saints were already tearing up their neighbourhood with hot-shot high-energy rock & roll, but for the guitarist, everything that happened between the bands sporadic live performances and his record collection was a mystery [extract from wikipedia]
.
Among other duties at Astor, Kuepper was fortunate to be in charge of handling requests for custom pressings. He began to receive tapes  often from truckies who played a little C&W in their spare time. Independent recording was far from a new thing, in Queensland or elsewhere. But until the penny dropped in Eds mind, no Australian band before them had ever thought to do it themselves.
Those three magic words, Do It Yourself, provided the keys to the kingdom.
Really, though, there was no choice. The Saints werent necessarily miles ahead of their time in world terms  the Ramones were getting it together in New York, and when Kuepper first heard the band, he was famously disappointed for feeling beaten to the punch. But Brisbane aint New York. Even in Sydney, no record company was game to touch the equally reviled Radio Birdman.

Emboldened, the Saints booked themselves into Bruce Windows 16 track studio in West End. Two hours later, they emerged with three minutes of history. "(Im) Stranded" was released on the bands own Fatal Label, was sent around the world, and by September 1976  before the Damned, before the Pistols and the Clash  the Saints found themselves a momentary cause celebre, thanks to a stunning review in Londons Sounds magazine.

The Saints' debut single '"(I'm) Stranded" (September, 1976) was voted Single Of The Week by British rock music paper Sounds.
In July, 1977 The Saints scored a Top 40 hit in Britain with "This Perfect Day".

In 1977 The Saints recorded cover versions of Connie Francis' "Lipstick On Your Collar", and Ike And Tina Turner's "River Deep, Mountain High" for the One, Two, Three, Four E.P. (October, 1977).


The Saints - This Perfect Day


The Saints - Lipstick on your Collar