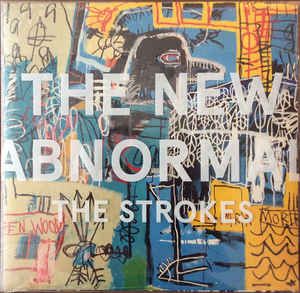 Notes
Packaged in a hard plastic sleeve.
Includes a custom inner sleeve, a foldout poster, and a download card.
Track numbering is sequential across sides.

A1 The Adults Are Talking
A2 Selfless
A3 Brooklyn Bridge To Chorus
A4 Bad Decisions
Written-By – Billy Idol, The Strokes, Tony James

"The Strokes will always have a complicated legacy. They came out of the gates with the single defining statement in 2000s guitar rock, and in the nearly 20 years since everything they have done has been compared to Is This It. I told a friend that I was reviewing the new Strokes record, the first in seven years, and the only reaction I heard was, “Is it as good as Is This It?” This is all to say, if all you are looking for from The Strokes’ latest offering is a retread of Is This It, you will be disappointed. Instead, The New Abnormal is the most vital and consistent the band has sounded in over a decade.

The lead singles of this record give two distinct, and seemingly contradictory, pictures of the album. “At the Door,” is a synth-led slow burn of a track. While an unexpected choice for the first single, it still has an immense, cinematic sound and a heart wrenching vocal performance from Julian Casablancas. The closest reference point here seems to be Casablancas’ work with The Voidz. Meanwhile, “Bad Decisions” sounds closer to a throwback to the band’s garage rock roots with a New Wave twist. The guitars sound similar to an Is This It or Room on Fire track, run through Modern English’s “Melt With You.” Although the song is somewhat of a genre lift, even going as far as to interpolate the melody of “Dancing With Myself,” it’s still the closest the band has come to hitting the effortless energy of the classic Strokes era.

Where The New Abnormal succeeds is how well it unites these disparate sounds in one album. The songs here may be looser and, in some cases, more unconventional, but they still feel quintessentially of The Strokes. “The Adults Are Talking” is an instant highlight with its dueling guitar solos, Casablancas’ iconic croon, and earworm melodies. Later, “Brooklyn Bridge to Chorus” starts with stabbing synths, but transitions into more familiar territory with one of the most addictive choruses on the record. This album holds onto the sharp melodies and double guitar hooks of the band’s best material, but also works in some of the left-field experimentation of The Voidz. It is all brought together masterfully by Rick Rubin’s production.

The pace of the album does slow in the second half as the band explores more leisurely material. Much like “At the Door,” these songs take their time unfolding but reveal great beauty as they do. However, this does slow the momentum later in the album. “Not the Same Anymore” is especially guilty of this. While it does have a dynamic vocal performance from Casablancas, the instrumental behind him is probably one of the least interesting on the album, which weighs it down. Thankfully, “Ode to the Mets” ends The New Abnormal on a high note with one of the best songs on the album." (http://www.undertheradarmag.com/)

The Lowdown: During The Strokes’ New Year’s Eve show at the Barclay Center last December, singer Julian Casablancas made the following declaration: “The 2010s, whatever the fuck they’re called, we took ‘em off. And now we’ve been unfrozen and we’re back.” It was the most direct rejection yet of the forced and fractious process behind mildly received records like 2011’s Angles and 2013’s Comedown Machine. While those records have their share of admirers, they’re also ones that the band now describe as being made out of contractual obligation and not, as Casablancas put it to The Guardian’s Alexis Petridis, “out of pure brotherly love or musical inspiration.” Now, if we’re to believe it, things have swung in the other direction. After a decade and a half of side projects and addictions and intra-band conflicts, The Strokes are asking for a do-over. It comes in the form of the Rick Rubin-produced The New Abnormal, the band’s first album in seven years, and (apparently) the first where they’ve really meant it in even longer than that.
The Good: Whether it was a moment of unguarded honesty or a canny bit of pre-release marketing, The Strokes’ admission of the increased effort put into The New Abnormal feels accurate from the jump. Opener “The Adults Are Talking” presents the platonic ideal of what a Strokes song should be in 2020: the motorik drums from Fab Moretti, a cruising bassline from Nikolai Fraiture, dueling garage guitars from Nick Valensi and Albert Hammond Jr., and the unmistakable hipster croon of Julian Casablancas. It’s a conscious throwback to the days of Is This It and Room on Fire, the best Strokes song in at least 14 years, and a called shot from a veteran band playing consequence-free music for the first time in a long while. When Casablancas slinks his way through lines like “We are trying hard to get your attention,” you get the sense that he means it.
Their hooks securely sunk, The Strokes deliver an A-side that is, especially by our increasingly tempered expectations, an unquestionable success. Much of this success comes from the way these tracks synthesize and recontextualize the kind of Vaseline-lensed ’80s pop excess for which the band originally offered the antidote. From the curlicue Cars-style guitars of ballad “Selfless” to the staccato neon keys of “Brooklyn Bridge to Chorus”, these backward-looking flourishes add even more sentimental weight to lyrics that find Casablancas exploring everything from the costs of sobriety to correlation between the heaviness of breakups and proximity to middle age. Later, these ’80s homages get even more direct; you’ll hear clear echoes of “Dancing With Myself” in the rueful single “Bad Decisions” or the shimmering Psychedelic Furs single of your choice on the languid “Eternal Summer”. These homages are close enough to earn their original writers songwriting credits on the new record, but that cribbing is put to good use; at its best, the first half of The New Abnormal delivers the same kind of mannered maximalism that you’d find on ’80s releases by veteran acts like Fleetwood Mac (Tango in the Night) or David Bowie (Let’s Dance). It’s high praise, and it’s warranted.
Essential Tracks: “The Adults Are Talking”, “Brooklyn Bridge to Chorus”, and “Bad Decisions”
More Information
Please sign in with your email address or Create an Account.
New Products
Compare Products
Compare
Clear All
You have no items to compare.
My Wish List
Last Added Items
Go to Wish List
You have no items in your wish list.
Vinyl Records Vancouver
Categories
Help
Quick Link
Newsletter