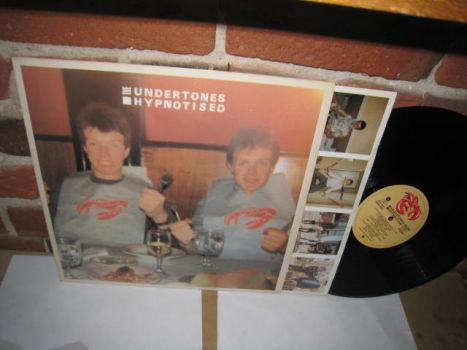 Comes inner sleeve with photos of members of the band being goofy and chilling out.


In an age where punk music was designed to shock the system and to generally be as controversial as they damn well liked, The Undertones seemed at odds with this view given their penchant for child-like innocent songwriting. On a recent music show, The Undertones's lead singer, Feargal Sharkey, claimed that their first and probably their best hit, Teenage Kicks was basically about onanism but apart from this schoolboy crushes and teen angst were much more in evidence; 'Smarter Than U', 'She Can Only Say No' and 'Let's Talk About Girls' falling into the former category whilst the splendid 'My Perfect Cousin' and 'I Don't Wanna See You Again' make up the latter. As well as upbeat punk-pop numbers, The Undertones produced thoughtful melodic pop gems such as 'Wednesday Week' and 'It's Going To Happen'. Maturity took an even greater hold later in their career and a definite soul influence can clearly be heard on 'Got To Have You Back', 'The Love Parade' and 'Bye Bye Baby Blue' before they split in the mid-1980's; Sharkey choosing not to reform the band despite numerous offers. As a singles compilation it does exactly what it says on the tin and despite some duff tracks there are enough enjoyable moments from each stage of their career to savour.


The Undertones - My Perfect Cousin