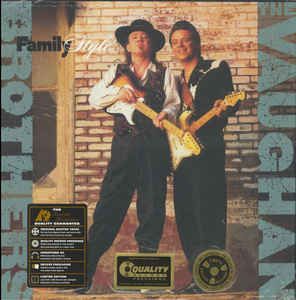 Family Style is the lone studio album from Stevie Ray Vaughan and his brother Jimmie Vaughan, issued in September of 1990 nearly a month after Stevie Ray's tragic death in a helicopter crash at just 35-years-old. Produced by Chic's Nile Rodgers and sans either guitarists longtime bands (Double Trouble or the Fabulous Thunderbirds), the easygoing affair served as a celebration of both brothers newfound sobriety and their future musical endeavors together.

The triumphant release entered the charts at No. 7 thanks to the runaway Motown/soul-inspired hit single "Tick Tock" and was a double 1990 Grammy Award-winner (Best Contemporary Blues Album and Best Rock Instrumental Performance - "D/FW"). Both Stevie Ray and Jimmie are in top form trading licks and guitar styles with further standouts coming in the form of the compelling numbers "Telephone Song," "Hard to Be," and "Long Way From Home."

As they did with their vaunted Texas Hurricane box set, Analogue Productions is again bringing you the finest-sounding Stevie Ray Vaughan collections ever preserved on 200-gram vinyl. Ryan Smith at Sterling Sound cut the lacquers for the LPs using the ultimate VMS 80 cutting lathe. Gary Salstrom handled the plating and the vinyl was pressed at Quality Record Pressings.