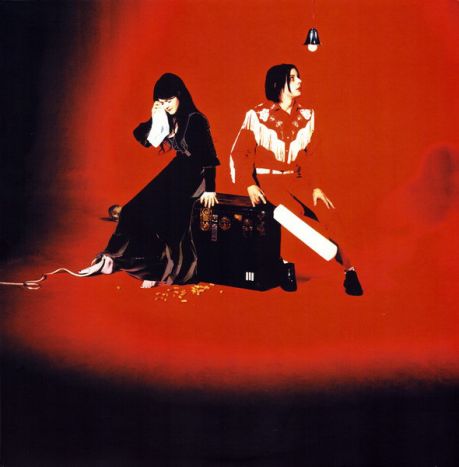 Notes: Recorded to eight track reel-to-reel at Toe-Rag Studios, Hackney, London in April 2002, except B1 recorded at the BBC Maida Vale Studios.
Mastered at Transfermation.

The White Stripes are a duo who record all their material on old analog recording equipment and refuse to embrace the digital revolution. The result? An album that sounds warmer and more real than just about anything that has been around in years!
That's no exageration either, as this album just exudes a sound that is sadly being left in the past. There are not multiple takes to get the playing perfect either; all the little imperfections in the playing and singing are left in, so it doesn't have the cold feel that most music has now.

The song are great too, starting with "Seven Nation Army", with a catchy bass line that gets the groove going, and then they just keep coming. Meg duets on "I Just Don't Know What to do With Myself", which wrenches the emotion from the words. "Ball and Biscuit" is my favourite - a kind of 21 century blues that Led Zep would be proud of.

After three albums you wonder exactly what a guitarist and a drummer can do to keep things moving forward whilst maintaining the brilliance of previous efforts. The fact that creatively they have moved forward and musically they have exceeded any hopes I had of their forth album just shows how special The White Stripes really are.
Elephant is quite simply one of the finest records of 2003. As if Jack's heart was actually plugged into the amp it will take on a roller coaster journey that will leave you exhausted at the end. We are taken back to the rawer guitar sound of De Stijl and with a number of tracks like Ball & Biscuit, Black Math and Girl You Have No Faith In Medicine rocking some amazing guitar work you can see that Jack is really having some fun on this record. The Stripes seem to be enjoying their new found fame rather than resenting it and with Elephant you can see how it's paid off. It is such an accomplished album that will be throttling your stereo all summer.

Elephant proves beyond any doubt that The White Stripes are in a league of their own. All the hype and all the praise wouldn't be enough to describe how important this band are to music.