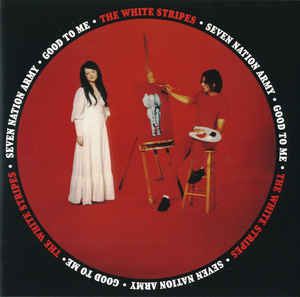 B Good To Me


"Seven Nation Army" is the first track on the album Elephant by American alternative rock band The White Stripes. It was released as a single on March 7, 2003, and reached number one on the Modern Rock Tracksmaintaining that position for three weeks. It also became the third best-performing song of the decade on the same chart. It was well received commercially as well, and won the Grammy Award for Best Rock Song.


The song is known for its underlying riff, which plays throughout most of the song. Although it sounds like a bass guitar (an instrument the group had never previously used), the sound is actually created by running Jack White's semi-acoustic, 1950s-style Kay Hollowbody guitar through a DigiTech Whammy pedal set down an octave. A combination of the song's popularity, recognizable riff, and military lyrics led to it becoming the band's signature song, and has been used widely at sporting events and political protests internationally.


"Seven Nation Army" received overwhelming critical acclaim. Remarking on the White's reputation as a "garage rock" band, Billboard remarked of the song that even "adventurous rock programmers might want to join the 'Army.'

AllMusic call the song "breathtaking," and said that it delivers "some of the fiercest blues-punk of the White Stripes' career."

The song featured on many "end-of-year" and "best-of" lists. In 2004, "Seven Nation Army" was ranked at number three on the Pazz & Jop critics' poll, by the American music magazine The Village Voice. It was number six on Rolling Stone's 2009 list of the 50 Best Songs of the Decade.


It was also called the 75th greatest hard rock song by VH1. In May 2008, Rolling Stone placed this song at number 21 in its list of the 100 Greatest Guitar Songs of All Time.

On Rolling Stone's updated version of their The 500 Greatest Songs of All Time, "Seven Nation Army" was listed at number 286. It was also ranked #1 on Rhapsody's list of the Top 100 Tracks of the Decade.

In February 2013, listeners to BBC Radio 6 Music placed the song at number 6 in "6 Music's 100 Greatest Hits", the top songs released in the station's lifetime.

The White Stripes - Good To Me