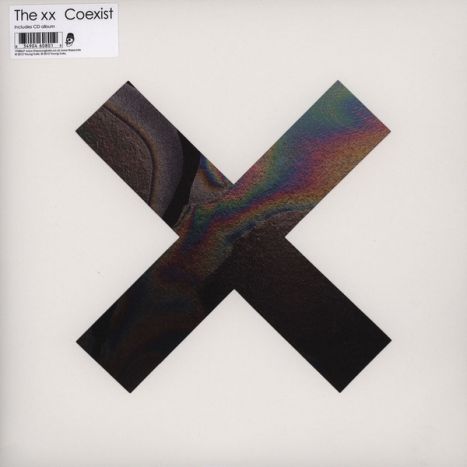 Issued in a plain white gatefold die-cut sleeve holding the vinyl, the CD.

The first time I listened to The XX's eponymous debut album, it was hard to not be excited about the band's future. From start to finish, the record was excellent - the band used minimal instrumentation to create quiet, moody atmospheres to let their songs dwell in.


Most notably, the two vocalists, Oliver Sims and Romy Madley Croft, carried the album with their soft duets - their voices would rarely rise above a murmur, but together they were able to evoke heartwarming love or heartbreaking pain. After a handful of years, The XX is back with COEXIST, an album that picks up right where the band left off.

The band has largely preserved their sound even with the departure of guitarist Baria Qureshi who left in 2009. Qureshi, who left in 2009 due to personal differences, was not replaced, and the band has moved forward as a 3-piece. Unfortunately, the prominent guitarwork that made songs like "Untitled" and "Crystalised" so irresistible is missing on COEXIST, but the band is able to compensate for this absence through other means.

Most of the COEXIST's music is created with minimal instrumentation and a touch of reverb; every now and then, new instruments enter the fold, notably a steel drum ("Reunion"). The album starts off with "Angels." It's the album's lead single, and the song is surprisingly bare - Madley Croft's vocals are complimented by spare instrumentation, but the song relies completely on her voice to sell it. Not only does this track set the tone for COEXIST, but it's one of the highlights on the album. "Chained" introduces slightly more instrumentation, but not much - the album rarely rises above a whisper.


The following track, "Fiction," is another one of the album's best: it's held together with a nice electronic beat that doesn't really change throughout its running time, but it offers Sims a nice opportunity to create a brilliant melody. There are times when songs' rhythms edge towards dance-territory ("Sunset" or "Swept Away" for example), but the album never feels cheap or pandering with its pulsating beats.


"Tides" makes use of a funky groove and guitar accompaniment. The final song, "Our Song" features a duet over a slightly dissonant loop, it features a similar cadence to "Angels," so the album begs to be put on repeat. It's a good song to end the album, but for me, it was one of the weaker standalone tracks.

I think it would be remiss to talk about this album without spending a little time on the lyrics. There are moments on COEXIST when the vocalists paint beautiful imagery with their words. Most of the subject material involves lovers pining over one another or confessing their love for the other - it all works with the perfect delivery of the vocalists.


In "Angels:" when describing her love-interest, Madley Croft sings "if someone believed me, they would be in as love with you as I am." In "Fiction:" "I wake up alone, with only daylight between us/ Last night the world was beneath us." In "Our Song: "And there's no one else / that knows me / like you do... The walls I / hide behind / you walk through / you just walk through."