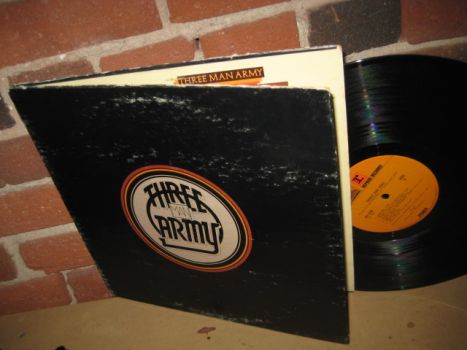 Vinyl: VG+, some scuffing (listen to our copy)
Gatefold cover has ring wear and wear to edges and corners

This is a GREAT 70's Hard Rock album. The Band consists of Adrian Curtis (Gurvitz) on guitar/vocals/keyboards, his brother Paul Gurvitz on Bass/vocals and Tony Newman (ex-David Bowie) on drums.
The level of musicianship is top notch. Most neo-rock bands of today can't touch a group like this. It's sad that this band never became big because this is music worth having in your collection.
Standout tracks are 'My Yiddishe Mama', 'Mahesha', 'Can't Leave the Summer (Part 1 and 2)', and 'Take me down from the Mountain'. There are no bad tracks on this album.

Three Man Army was a British hard rock band active in the first half of the 1970s.

The group was formed by Adrian Gurvitz and Paul Gurvitz, formerly of The Gun. Following the band's dissolution, Adrian played with Buddy Miles and Paul played with Parrish & Gurvitz, then reunited as Three Man Army. Their debut album, A Third of a Lifetime, featured several drummers, including Miles, Carmine Appice (of Vanilla Fudge) and Mike Kellie (from Spooky Tooth). Tony Newman, who had previously played with Sounds Incorporated and Rod Stewart, joined for the group's next two albums, and a fourth album was planned but never recorded. Newman then left to play with David Bowie, and the Gurvitzes united with Ginger Baker as the Baker Gurvitz Army.
More Information
Please sign in with your email address or Create an Account.
New Products
Compare Products
Compare
Clear All
You have no items to compare.
My Wish List
Last Added Items
Go to Wish List
You have no items in your wish list.
Vinyl Records Vancouver
Categories
Help
Quick Link
Newsletter