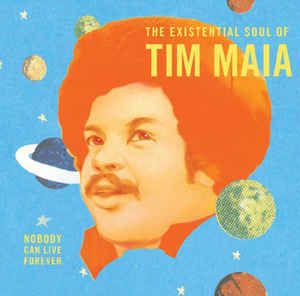 Tim Maia - Nobody Can Live Forever

Setting aside the somewhat annoying Putumayo-for-hipsters style packaging, graphics, and marketing copy, this is actually a very helpful and eminently listenable collection by the late Brasilian soul star. As the thoughtful and refreshingly even-handed notes explain, Maia was not a grand innovator. He was no relentless experimenter like Tom Ze, he didn't set artistic and political concepts on their heads like Caetano Veloso, nor did he write with the poetic beauty and nuance of Chico Buarque. His was a much more visceral, sensual art, marked by propulsive grooves, somewhat mundane (but also elliptical and charming) lyrics, and his appealing voice--which is a perfect hybrid of gruff and sweet. This is music for block parties and bedrooms, funky and fun.

As the booklet nicely explains, Maia was also no radical nationalist musically: This stuff is American-style '70s R&B, with a few Brasilian touches, but for the most part American-inspired. But, whenever cultural barriers are crossed (think Memphis's Big Star recreating the British Invasion or Ray Charles still-staggering country/western transformations), new wrinkles, subtleties, and happy accidents emerge from the transition and translation.

Rather than dwell on Maia's artistic decline, this anthology focuses on his '70s prime, with a special emphasis on the fascinating "Racional" albums he made while a member of a bizarre UFO cult. The oddball spirituality of these "Racional" cuts isn't so far off from the wide-eyed wonder of his more mainstream work, and alongside one another they sound quite nice. The musicianship is fantastic throughout, funky yet polished, and Maia's eventual vocal was still a few years off. The sum effect is a moving portrait of a big-hearted, somewhat naive, inclusive soul man who is both of the world at large and uniquely Brasilian.