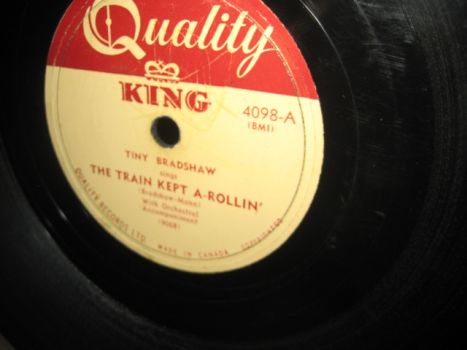 
Tiny Bradshaw, born 1905 in Youngstown, Ohio, was one of the most prominent bandleaders of the '30s and '40s who led groups of essentially jazz-trained musicians into the developing (and more commercial) field that came to be known as rhythm & blues and toured the "chitlin'" circuit as competition to shouter Wynonie Harris' crack team of studio blowers in the late '40s and early '50s. Though Tiny had only half the pipes of his huge-voiced rival his tightly knit band became known as one to reckon with, stressing a heavy backbeat that would later inspire early rockabilly artists like Elvis Presley, vocalist Johnny Burnette and pianist Moon Mullican.

A vocalist with other bands early in his career,

In 1934, Bradshaw formed his own swing orchestra, which recorded eight sides that year. The band's next recording date was in 1944, at which point its music was closer to rhythm and blues. The band recorded extensively for the rhythm and blues market, especially between 1950 and 1954.
enjoying five Billboard hits with King Records (where he was a labelmate to many of the other leading jump blues performers of the era

Bradshaw's best known recording was "Train Kept A-Rollin'" (1951), which passed from rhythm and blues into rock.
( the original "Train Kept A -Rollin'")

The song was recorded by Johnny Burnette in 1956 and The Yardbirds in 1965. It was covered again by Aerosmith in 1974 and by Motörhead in 1978.
More Information
Please sign in with your email address or Create an Account.
New Products
Compare Products
Compare
Clear All
You have no items to compare.
My Wish List
Last Added Items
Go to Wish List
You have no items in your wish list.
Vinyl Records Vancouver
Categories
Help
Quick Link
Newsletter