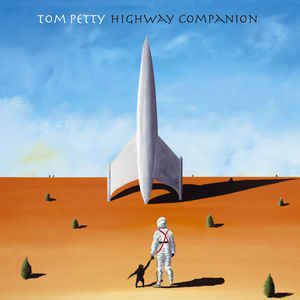 A1 Saving Grace
A2 Square One

A3 Flirting With Time

B1 Down South
B2 Jack

B3 Turn This Car Around

"The 12 songs collected on Petty's first solo-billed record since 1994's sterling "Wildflowers" represent not the slightest twitch in game plan from Petty, who pens tracks like "Square One" and "Night Driver" with all the apparent effort of someone pouring a bowl of morning Frosted Flakes -- and that's what givesHighway Companion its reserved strength.

If anything, Highway Companion sounds like a thoughtful, sometimes melancholy, ode to the fading romanticized ideal of rock 'n' roll, the music-as-redemption theory one ostensibly posits more when one starts getting up in years (and starts tossing around his own retirement, as Petty has sort of done). Released on the Rick Rubin's American label and recorded with erstwhile Heartbreaker guitarist Mike Campbell and longtime collaborator Jeff Lynne, Highway Companion gets its job done in the appealingly workmanlike fashion you'd expect from such a lineup. When Petty revs up the fan-friggin'-tastic first single "Saving Grace", he lets the rockabilly guitar, the itchy, twitchy din-da-din-da-din percolate for a while, giving that hint of impending danger. Saving Grace" certainly rocks, it's doubly effective because it conjures up, with startling ease and efficiency, the commonly accepted notions of rocking -- the splashing drums, the sinister but explosive guitars, the lyrics about flying through sleeping cities." (PopMatters)