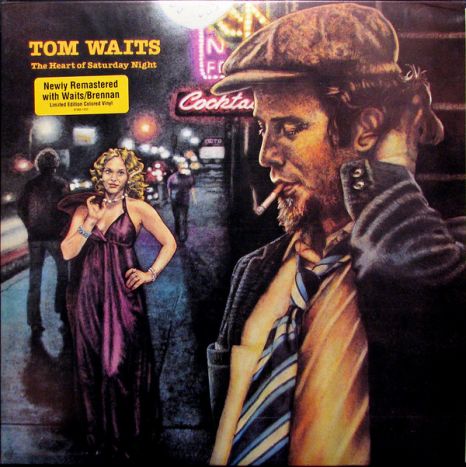 A1 New Coat Of Paint

A4 Shiver Me Timbers

A5 Diamonds On My Windshield

B1 Fumblin' With The Blues

B2 Please Call Me, Baby

B4 Drunk On The Moon

The Eagles might have covered his song "Ol' 55" but Tom Waits was cut from a different cloth than California's other singer-songwriters--he suggested a scruffy beat poet who'd walked out of a forgotten scene of Jack Kerouac's On the Road. Waits's beatnik schtick could get old and he developed into a much more musically adventurous songwriter in later years, but his second album contains some of his best early work, including the sweet romantic blues of "New Coat of Paint" ("You wear a dress baby, I'll wear a tie"), and his best hipster recitation, "Diamonds on My Windshield". Two songs are enduring classics: the doleful, dirge-like "San Diego Serenade" ("Never saw the morning till I stayed up all night") and the touchingly sweet "(Looking for) The Heart of Saturday Night" ("Stoppin' on the red, goin' on the green, 'cause tonight'll be like nothin' that you've ever seen"). --John Milward