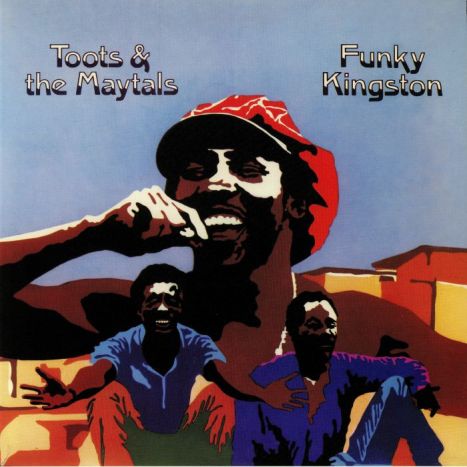 A1 Sit Right Down
A2 Pomps And Pride
A3 Louie, Louie
A4 I Can't Believe

FUNKY KINGSTON is the hard-core ethnic stuff. As the first Maytals album in America, it is cause for celebration. Toots [Hibbert] and the Maytals [Gerry McCarthy and Raleigh Gordon] have been together 13 years without a personnel change, turning out an endless stream of Jamaican hits that whole time.

Their main strength is in the song writing and singing of Toots. He can write at the drop of a spliff about seemingly anything, and his songs convey a spirituality that has less to do with Rastafarianism than with the folk wisdom and Christianity of an ancient Delta bluesman.

Toots is the most intense reggae shouter extant. He has a gravelly, gut-wrenching voice that owes a lot to soul music (Otis Redding in particular). He will sometimes break into scat singing, as if he'd gone into a trance and couldn't control himself, right in the middle of a line.

Maytals music flaunts influences without ever sounding unoriginal. They weave older Jamaican forms, New Orleans rhythm and blues, gospel, soul, and African chanting into something totally pure and different. Using the same sessionmen as all the other Jamaican singers, the Maytals still coax out of these players much more imaginative, dynamic performances.

Funky Kingston Is a long overdue album; with the exception of Bob Marley and the Wailers (whose approach to reggae is radically different), Toots and the Maytals have no peers, and it's about time America got the message.