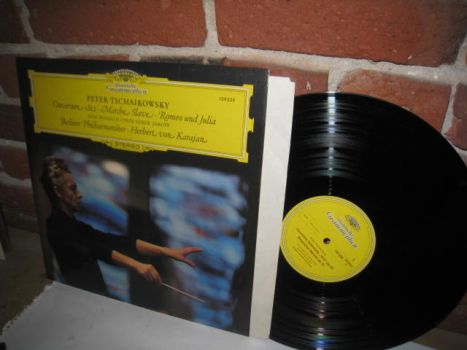 Herbert von Karajan was among the most famous conductors of all time -- a man whose talent and autocratic bearing lifted him to a position of unprecedented dominance in European musical circles.

Tchaikovsky commands, if not universal respect amongst music critics, then the undying devotion of millions of music lovers who find in his work an inexhaustible well of heartfelt emotions. For Tchaikovsky was very much an emotional (some would say overwrought) composer.

Although Mozart was his favorite it could hardly be said that Tchaikovskys music itself possessed any degree of classical restraint. His turbulent life was reflected in his passionate works, more so than any other romantic composer, save perhaps Berlioz. What Tchaikovsky did share with Mozart was the seemingly endless flow of his melodic ideas. Tchaikovskys music is easy to sing. Indeed so close do his musical ideas approximate the range of the human voice, that in the 20th century Tin Pan Alley set lyrics to a number them and crafted several popular songs.

Tchaikovsky was the first to admit he had a problem with large-scale musical structure. His musical gift found its niche in smaller, cellular melodic, forms which made him supremely gifted as a composer of ballets and short orchestral pieces like the perennially popular 1812 Overture, for instance, or the Romeo and Juliet, Fantasy Overture

and the 1812 Overture...
I love this version, and aside of any personal tastes we should recognize Karajan for give popularity to this pieces as was originally conceived by the composer with the capella choir and all the bells and whistles.

..In my taste i find this interpretation superb, the Don Cossacks was a very clever touch, the rush is clearly in respond to what a battle is all about, very pleased with this interpretation
More Information
Please sign in with your email address or Create an Account.
New Products
Compare Products
Compare
Clear All
You have no items to compare.
My Wish List
Last Added Items
Go to Wish List
You have no items in your wish list.
Vinyl Records Vancouver
Categories
Help
Quick Link
Newsletter