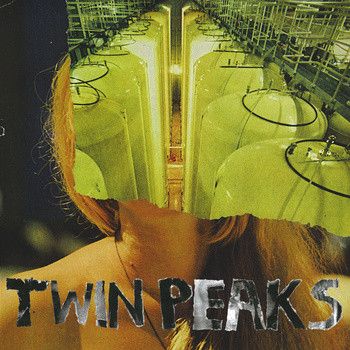 "The Chicago quartet Twin Peaks deserve a better, more imaginative name, because they have made a very good album in a style-- sloppy, Replacements-inspired rock-- where "pretty good" is an easy bar to clear and anything above that formidably harder. Power pop and bar rock bands work from a sort of creative commons of riffs and bass lines: There's the "Shake Some Action", the "Lust for Life", the "American Girl". You can hear a few of these old chestnuts echoing around in Sunken, Twin Peaks' newly re-released mini-LP. When there is so much agreeable stuff lying around, all of it worn shiny with generations' worth of love, to make someone actually pay attention to you requires real talent, and Twin Peaks have perfected the kind of songwriting that puts you in a practiced, happy headlock.
Sunken is less than twenty minutes long, but it packs a lot of color and verve into that blink of an eye. "Out of Commission" occupies a minute and 25 seconds of precious running time but it still finds a moment to burn a joyfully squalled miniature Thin Lizzy guitar solo onto the song's surface. The four of them-- lead singer and guitarist Cadien Lake James, Connor Brodnor, Clay Frankel, and Jack Dolan-- have been playing together since high school, and they've developed a sharp melodic ear, a knack that pops up in their arrangements as often as in their vocal melodies. Almost every guitar note on this album is hummable: "Baby Blue" cycles between a chiming, wintergreen riff and another squiggled lead, this one reminiscent of the Strokes' Nick Valensi. "Ocean Blue" wraps a tight little cluster of shimmery notes around the chord progression, flickering around Cadien Lake James' slow-moving vocal line."
More Information
Please sign in with your email address or Create an Account.
New Products
Compare Products
Compare
Clear All
You have no items to compare.
My Wish List
Last Added Items
Go to Wish List
You have no items in your wish list.
Vinyl Records Vancouver
Categories
Help
Quick Link
Newsletter