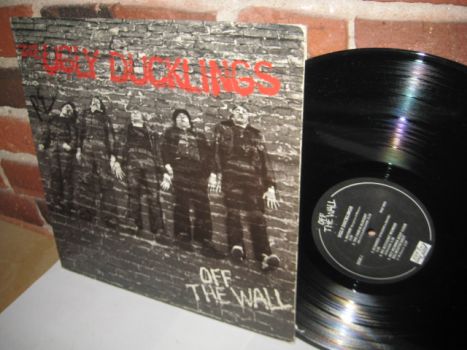 Record is VG++
Cover has cornerwear and two inches handwriting

1. JUST ANOTHER ROCK N ROLL BAND
2. ALL DRUGGED OUT
3. YESTERDAY'S CHILD
4. REALITY
5. THE BAND PLAYED ON


Coming from Toronto, Ontario in the mid Sixties (1965), Ugly Ducklings were a garage rock band. The band mixed elements of The Kinks, Yardbirds, The Who, and The Rolling Stones into their music, but were know for delivering some songs with a high energetic punk delivery. The band consisted of Dave Bingham (vocals/guitar), Rodger Mayne (Lead Guitar), Glynn Bell (Rhythm Guitar), John Read (bass), and Robin Boers on drums. The five piece garage outfit scored some success with their debut single "Nothin'" on CHUM- AM radio in Canada. The song itself was a distorted, fast energetic song with punk elements. The bands second hit for CHUM-AM was "Gaslight" a more psychedelic number. The band even opened for the Rolling Stones at Maple Leaf Gardens.

In 1967 the band released Somewhere Outside their first full length album. The album contained the bands first three singles and other songs such as the dirty garage riff filled "Just In Case You Wonder", and the instrumental "Windy City". By 1968, the band split up. It was ironic that at this time Mick Jagger had said that Ugly Ducklings were his favourite Canadian band, but they were no more. In the 70's Rodger Mayne would manage the Canadian punk act The Viletones. In 1980, the band reformed for another album Off The Wall. The band would get a new drummer former Diode member John Hamilton. In 1982, the band released another album this time it was self titled.

Ugly Ducklings have been featured on countless garage rock compilations.

UGLY DUCKLINGS - "THE BAND PLAYED ON


This is our autobiographical song from our second album,"OFF THE WALL". It was recorded "Live" at "The Warehouse" in Toronto, May 2nd, 1999