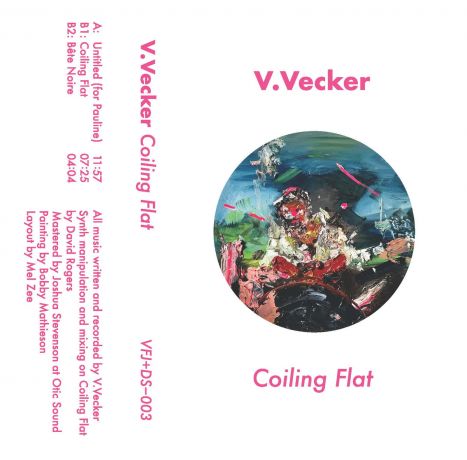 This EP consists of 3 tracks recorded and mixed between May 2017 and January 2019.

Side A is a track that was commissioned by the Media Arts Committee at the Co-op Radio Station in Vancouver, BC, Canada for a Tribute to Pauline Oliveros. Taking inspiration from an interview with Pauline from the 1970's in which she describes being so upset at the political turmoil raging across America. She couldn't bear to play any music while the country was seemingly falling apart around her, except for a single A note.

Upon reading that, I picked my favourite note on the tenor saxophone and played the note as many times as possible and in as many variations, all while looping these phrases. The added melody at the end was not planned but was composed instantaneously as I was recording.

Side B features two tracks of saxophone paired with a Moog Sub 37. "Coiling Flat" was the product of an arpeggiation and another instant saxophone composition, this time on the alto saxophone. The arpeggiation was modified and sculpted in real time by David Rogers.

"Bete Noire" was a commission for a series of visuals made via analogue video synthesizers by Kevin MNZ. Entitled "Fermented Memories" this is the sound track to one of the 12 videos in the collection. Composed along with the video, the title "Bete Noire" is a nod to Sonny Rollins, in which he described his saxophone as his "... black beast, my Bete Noire..." due to his inability to play it because of health issues. The title felt appropriate as the synthesizers intensify the saxophone gets buried and attempts to claw its way back out.