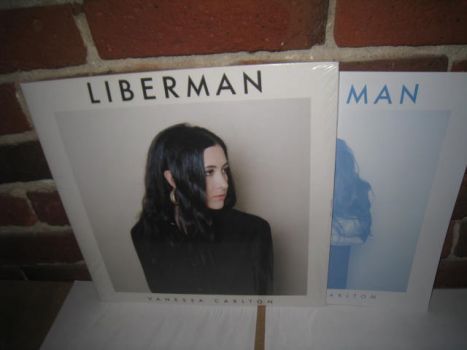 
Released on heavyweight 180g vinyl. Gatefold. Includes insert with picture cover, 2 pages of lyrics & credits and back cover art. Digital download code also included. This version is the original release on black vinyl. The only way to tell for sure you have the black vinyl instead of the clear vinyl is to break open the shrinkwrap and check.

Carltons new record Liberman. Although the records name conjures up unpleasant, vague associations with former United States Senator Joseph Lieberman, the record itself is one of the strongest and most consistent of Carltons career. Liberman continues further into the reverb laden, dream-pop direction of Rabbits on the Run. At times, Liberman reminds the listener slightly of Nordic dream-pop enthusiasts like the Radio Dept. or Delay Trees, although Carlton never approaches the more noisy excursions of the former.

Libermans ten tracks whip by, each track filled with sweet, well-timed melodies and haunting atmosphere. It is over before you know it, compelling the listener to repeated, often back-to-back listens. Opener Take It Easy begins with a throbbing, almost danceable rhythmic pulse that would not sound out of place on one of the Italians Do It Better records. While this sound is kind of new territory for Carlton, it works really well for the song and anyone who listened carefully to Rabbits on the Run will not be surprised by it. Mid-album highlight Nothing Where Something Used to Be also employs the rhythmic sensibility observed on Take It Easy while also displaying the lovely vocal melodies that have always been one Carltons greatest strengths as an artist.

Throughout its ten consistent tracks Liberman proves itself to be a mature, developed version of Vanessa Carlton that still retains those qualities that made Harmonium so enjoyable. With any luck, Liberman will earn her some larger venues, bigger tours, and new fans. The age in which someone like Vanessa Carlton can release platinum selling albums is probably gone for good, but records as strong as Liberman deserve as large of an audience as the world can muster in these strange, dystopian times of ours.
More Information
Please sign in with your email address or Create an Account.
New Products
Compare Products
Compare
Clear All
You have no items to compare.
My Wish List
Last Added Items
Go to Wish List
You have no items in your wish list.
Vinyl Records Vancouver
Categories
Help
Quick Link
Newsletter