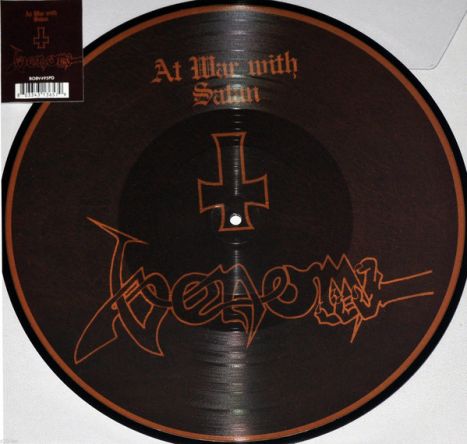 A1 At War With Satan

B1 Rip Ride
B2 Genocide
B3 Cry Wolf
B4 Stand Up (And Be Counted)
B5 Women, Leather And Hell
B6 Aaaaaaaarrghh

Venom's 3rd album into the darkest depths of hell opens up with the classic 20 minute opus, "At War With Satan." Personally, I think it is one of Venom's greatest songs. There is never a dull moment during this song considering how long it is. Cronos, Mantas and Abbadon let thier imaginations run rampant and there is so much going on throughout the song that you feel you are on a rollercoaster ride. Only in the past couple of years have I seen Venom start to get some recognition and that's sad. If people could look past the satanic imagery and really analyze the music, they would see that Venom is a very talented band doing a lot of stuff way ahead of it's time. If it wasn't for Venom, thier would be no bands like Slayer, Voivod, Mayhem, Emperor, Burzum or even Metallica. All these bands plus countless others cite Venom as an influence. Venom was the building blocks of real heavy metal and they should not be ignored. In my opinion, they are one of the greatest bands that ever came out. At War with Satan is just another classic NWOBHM album that is a must-have in the search for true metal. The remastered version contains a lot of bonus tracks that are very hard to find and are really great. Such as "Lady Lust" and "Warhead" just to name a few. By and large, Venom's At War With Satan is highly recommended in my book.