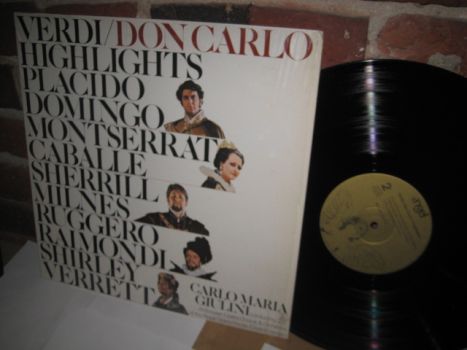 Opera in sound alone can never be the full monty, just as Shakespeare on the radio can't be. The grander the Grand Opera the more true this is, and Don Carlo is bigger in scope even than Aida. It is about a lot more than the story of a love-triangle set against a background of armies, slaves, pyramids and elephants: there are four parties to the love-interest alone, the role of Posa is nearly as important as any of them, and the action takes in the fate of the royal house of Spain, the imperial dominion in Flanders and the overweening power of the Spanish Inquisition. It cries out for staging. However in sound alone the Grand Inquisitor without his garb will have difficulty in being more than a disembodied bass voice given that his is a rather small part, and however dramatically kings, princes, princesses and nobles sing and act with their voices I can't help finding myself more concerned with them as sopranos, tenors, baritones and basses than as the dramatis personae they would be for me in the opera house.


I focus mainly on the musical side. In any case there is no possible risk that if this music is sung properly it will come across as a concert - Verdi sees to that. He was a dramatist to the marrow of his bones, and the listener at home has only to follow the words in order to be caught up in the grand sombre tragedy that Verdi has burned into music. The best performance recorded, for me, will be the performance that most consistently conveys both power and beauty, because this opera is about tormented human emotions at the mercy of ruthless political power in addition to their own tragic fallibility.

None of that needs any staging when conveyed in music like this. It would be a tall order to expect any performance of this outsize opera to be perfect. It is not a perfect work itself, on any showing. Even by Verdi's standards it went through an enormous amount of rethinking and revision, and it has surely the most peculiar and unconvincing conclusion there can ever have been in a work of its stature.

A worthy performance has to convey total and absolute belief and commitment, but the focus has to be on beauty as well, more than would be so in the opera house, because sound is all we have.

One doesn't have to get far into the first act to realise that this Don Carlo is going to score quite exceptionally highly in point of beauty. Domingo is in superb voice, and Caballe surpasses herself.

As the work goes on I suppose it might be fair to say that her lower register is not the equal of her higher, but this is Verdi and not Wagner. Wagner pitches his solo parts reasonably so as not to put strain on the voices, Verdi exploits the upper range of every voice except the bass with remorseless partiality, and Caballe rises to his monstrous demands magnificently.


Eboli is a mezzo role, but the challenge Verrett has to overcome is hardly less in that respect, and her confession of the theft of the jewel-box is perhaps the final solo gem in a performance that is a jewel-box itself. Not everyone is absolutely right - the Grand Inquisitor's voice is too youthful, but I have very little criticism indeed to make of any of the major roles. Raimondi as the king seems perfectly good to me, and Milnes delivers a fine rendering of the part of Posa, combining power and inwardness, sometimes at one and the same time. If there is a high spot to the entire performance it is surely the quartet in act IV, a sublime outpouring of beautiful sound from all the principals together.

In the last analysis this Don Carlo surpasses any other I have ever heard for its combination of sheer beauty with wholehearted power. Giulini was born to conduct it, and I doubt I have a single criticism of anything he does from start to finish.

The recording is now 35 years old, but you might not be able to tell. Now only weeks from Giulini's passing I am especially glad to be able to give such an unqualified endorsement to what I believe to be one of his finest achievements, indeed one of the finest opera recordings I know. It's only to be expected that there are details that one prefers in other accounts, but for sheer consistent quality at the highest level I would say your search can safely end here.
More Information
Please sign in with your email address or Create an Account.
New Products
Compare Products
Compare
Clear All
You have no items to compare.
My Wish List
Last Added Items
Go to Wish List
You have no items in your wish list.
Vinyl Records Vancouver
Categories
Help
Quick Link
Newsletter