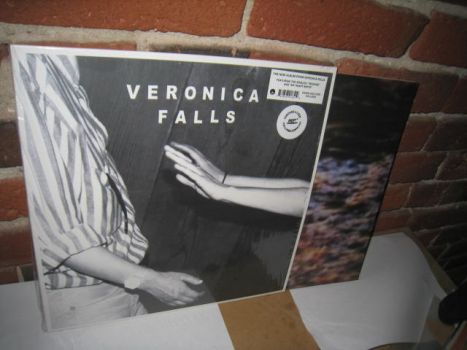 You may have had them tagged as goth-tinged pop fantasists, but with their much anticipated sophomore album ''Waiting For Something To Happen,'' Veronica Falls easily shrug off any notions of a difficult second album to create something that is easily more polished, more affecting, and more enduring than their peers could dream of making, and stake their claim as one of the most gloriously unpredictable and invaluable bands on the scene right now.


Recorded with Rory Attwell (Male Bonding, The Vaccines), ''Waiting For Something To Happen'' is a bold and deliciously assured leap forward which sees the quartet of Roxanne Clifford, Patrick Doyle, James Hoare and Marion Herbain easily throw off the tongue in cheek references to ghostly romances and suicides to elegantly distill the essence of an aimless twenty-something existence--the collective anxieties, tensions and confusion of moving from adolescence into fully fledged adulthood--into a set of immaculately conceived and perfectly wrought pop songs.


Veronica Falls' self-titled debut was released to universal acclaim in September 2011, including great reviews from Pitchfork, The New York Times, The Big Takeover, Spin, Pop Matters and more. Two sold-out coast-to-coast US tours followed, aided by strong radio airplay across college radio (Top 20 CMJ) and key non-commercial outlets (trend setters KEXP, KCRW, WXRT). Lead-off stream ''Teenage'' has garnered over 50k streams, landing it in the Hype Machine Top 10 charts. All signs are pointing to ''Waiting For Something To Happen'' being poised to be one of the breakout hits of 2013.

Whereas Veronica Falls' debut was filled with reverb-drenched, frenetic-yet-haunting songs reminiscent of Black Tambourine or the C86 "twee" sound of the 80's, only with intricate vocal harmonies, 'Waiting for Something to Happen' features a dreamier, warmer vibe, with its intertwining jangly guitars and clearer vocals resulting in a much fuller sound. While these songs may not have the immediacy of their debut, the beautiful melodies and harmonies more than make up for it.

The overall sound here actually shares as much in common with the breezy, beach-y dream-pop of bands like Real Estate or Beach Fossils as it does the eerie post-punk of their debut. The stellar "Teenage" is a good example, with it's fluid rhythms and blissed-out guitars, but those other bands never had the just-plain-gorgeous boy-girl harmonies found here. "If You Still Want Me" has been stuck in my head all day, with it's layered, overlapping vocals riding along on a bouncing rhythm that's nearly impossible to not bob your head to.

Two key areas where this album differs from the previous are the clearer, fuller-sounding production, and the drumming, which features a more standard "rock" style, with actual crashing cymbals every few seconds that gives it a more accessible, radio-friendly sound. In no way are these things negatives, imo, as the infectious melodies--this band's strong suit--are more up front now, and are only accentuated by the cymbals.

'Waiting for Something to Happen' maintains it's dreamy, jangle-pop vibe throughout, which can be both a positive and a negative. All the songs here fit together, but the lack of variety means the album can get a bit "samey" when listened to straight through. However, each song is essential listening for fans of this style, and they definitely won't be coming out of my rotation anytime soon.


Veronica Falls - Waiting For Something To Happen