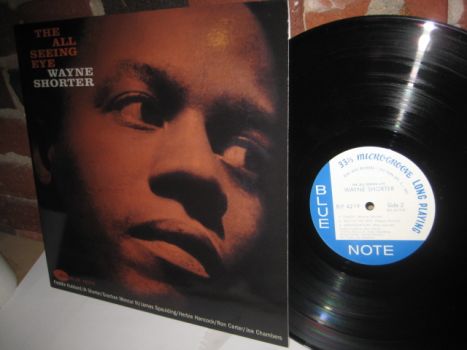 
A1 The All Seeing Eye
A2 Genesis


B1 Chaos
B2 Face Of The Deep
B3 Mephistopheles


The all-seeing Eye is one of Shorters more obscure records but it's actually his best IMO. The reason for it's relatively unpopular status is probably because the music is pretty close to free-jazz at times (it's not a free jazz record though, explorative post-bop or inside/outside is probably the best description), a form of music many people hate. For me, who love free-jazz and this Blue Note post-bopstyle, it's pure heaven.


Wayne Shorters playing is explosive throughout and so is Hancock. I'm not a big fan of Hubbard who appeared on far too many Blue Note records in this era (why they didn't use Woody Shaw more often is a mystery to me) but he does a good job without really standing out (as usual).

The front line is filled out with the awesome trombonist/composer Grachan MoncurIII and the underrated altoist James Spaulding. They don't solo much but their contributions are no less important for that, giving the ensembles a rich sound.

My two favourite songs on this LP is "Chaos" and "Mephistopheles". "Chaos" is raw, edgy post-bop at it's very best with a great, Dolphy -inspired solo by Spaulding and one of my all-time favourite Shorter solos where he starts off pretty uninspired but soon turns into one of his most explosive solos (also check out Joe Chambers drum responses when Shorter kicks into high gear). Even Hancock gets aggressive on this one!!!

"Mephistopheles" is the most untypical song on the record. It was written by (and includes) Waynes brother Alan who was more of a free/avantgarde performer. It was also recorded for Marion Browns debut album with a different title. This version, however, is much better. The tempo is slower and the drums get into an awesome, almost tribal, groove. Hancock pretty much plays one chord throughout which gives it a hypnotic quality. This song sounds almost unlike anything in jazz and MUST be heard!
More Information
Please sign in with your email address or Create an Account.
New Products
Compare Products
Compare
Clear All
You have no items to compare.
My Wish List
Last Added Items
Go to Wish List
You have no items in your wish list.
Vinyl Records Vancouver
Categories
Help
Quick Link
Newsletter