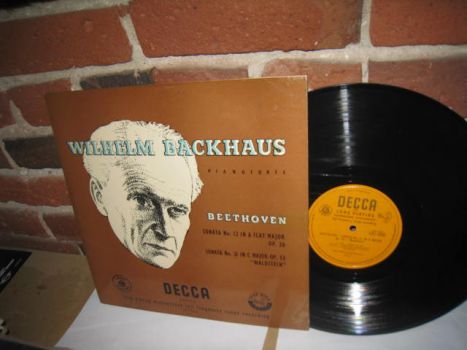 Skip to the beginning of the images gallery
Details
Willhelm Backhaus - Beethoven - Sonata No. 12 In A Flat Major Op. 26 - Sonata No. 21 In C Major Op. 53


Backhaus was one of the great exponents of the Classical and Romantic repertory and his performances had an integrity that eschewed any unnecessary display and flamboyance; his concern was to give the most direct interpretation of what the composer wishes and the structure and architecture of his chosen repertory was paramount. Backhaus recorded extensively for Decca throughout the 1950s and 1960s and recorded works by Beethoven, Brahms, Haydn, Mendelssohn, Mozart, and Schumann. His complete cycle of Beethoven Sonatas occupied him throughout the 1950s and 1960s and is regarded by many as his greatest achievement..

 Here is a pianist whose absolute mastery of technique and idiom affords him the space to follow his inner promptings without the slightest playing to the gallery. 

Stephen Kovacevich once said, "Wilhelm Backhaus was the only pianist who really understood Beethoven." I can go along with that.
More Information
Please sign in with your email address or Create an Account.
New Products
Compare Products
Compare
Clear All
You have no items to compare.
My Wish List
Last Added Items
Go to Wish List
You have no items in your wish list.
Vinyl Records Vancouver
Categories
Help
Quick Link
Newsletter