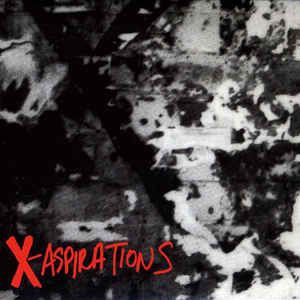 unknown to each other, a punk band called X also existed in Australia, and would turn out to be quite influential (mainly in Australia, but also elsewhere). Aussie punk & post-punk,

the result is perhaps what the Coloured Balls might have sounded like, had they emerged at this time and not in 1972, and I know one guy with good taste who thinks its the best Australian rock record ever, end of story. I wouldnt go that far, but its up there mixing with the greats. However, if you class it only up against other Aussie stuff of the same general style of music, ie. raw punk rock, it comes out as a clear winner. That said, class it against stuff of this kind from any country and it still floats up around the top with the best.

You cant over-analyze stuff like this, you really have to just listen to it and jump around, but Ill try to give you a general idea of whats on offer. The things that stand about about the sound are firstly Rilens bass  he plays it really hard, making every note drive the whole thing along rhythmically and melodically. Its said he used to string his bass with piano wire for the sound and increased strength, and it doesnt surprise me given the way he played, ie. with gusto. The next thing is Lucass vocals, which are just so right for this kind of raw punk rock, and without pretensions or adopted accents [as so many Australian musicians sing with an American accent, because thats just the done thing]. The guy sounds like hes gargling cement half the time, and not to any detriment, as well as being so unhinged I can imagine him half-crazed and gyrating deliriously with a toilet roll on his head, no clothes on bar some filthy y-fronts, and a six-pack of beer in one hand while sings into the microphone with the other, and enjoying every second of it. The last thing that stands out is Lucass guitar style, which makes the most out of simplicity, and is both direct and raw with the chords, as well as having a more angular, experimental tendency that comes out here and there in place of conventional guitar solos.


Suck Suck begins the album with furiously strummed bass, simple razor guitar slashes, and pounding, relentless drums. Its about what you gotta do to suck suck suck suck-seed, a venomous punk splatter thats very clear about not wanting to do any of those things.

Present follows a similar fastnfurious tack, whereas Simulated Lovers has more of a mid-tempo bounce with a catchy chorus line that all reminds me of some of the songs on the first Swell Maps album [minus the Faustian experimentalism].

Police has a funky bass riff that gives it an almost reggae feel, but this is still more of a punk thing than The Clashs Police and Thieves, which was more reggae than punk. Yet again, very cool stuff, and its clear these guys had a great knack for songwriting, turning something thats pretty simple on paper into something thats deceptively multi-faceted and creative. This segues  nay, slams  straight into ...
Revolution, a barnstorming fastnhard burst of ferocity thats like a cross between the MC5 and the Stooges. Stick it up your revolution, dont you know the time is near  rocknroll may be no solution, but thats what I wanna hear goes the roaring chorus, and fuck yeah is all I can say!
Turn My Head is yet another ripper, but hard to describe  actually, reminds me a bit of very early Pere Ubu with its jerky guitar and ropey bass riff.

Good On Ya Baby that follows is for me and my wife THE X song, and its just so strutting and balls-out  well, dick out as well, pants around your ankles while youre at it, and pump your fist in the air  and eminently lovable, not only for its very Aussie punk pummelling riffage that really swings both punches and hips but also for Lucas totally snotty but unpretentious couldnt-give-a-fuck gravel-gargling vocals.
Delinquent Cars is a little pedestrian and plodding, but still a good track, with interesting guitar wrenching going on in the background from Lucas.

I Dont Wanna Go Out features a wicked lurching off-kilter funky bass riff underpinning a song thats about just wanting to stay in and not go to the disco or the pool hall, with weird tape-warpings being used on some of the vocals to great comic and musical effect.


Lipstick is like a punk hangover of a 50s rock and roll ballad, nothing much special until the chorus bits, both lyrically and musically; it features an amusing relationship insight in the lines I know what I am to you... Im your dipstick, Im not your lipstick, Im your dipstick... and I dont mind.

It Must Be Me swings between an uptight metronomic beat with angular guitar and speedy gonzales punk blowouts, before segueing straight into Coat Of Green without notice, again a number with traces of 50s rock and roll and r&b, like Bo Diddley flattened through a punk rock pressing machine to create something quite different from its roots.

Waiting is a slow, grinding death dirge that makes me think of some Black Flag and maybe Killing Joke [have to re-visit Killing Joke, my comparison may be way off there]. Batman finishes the album with a fast, jangly injection of something more fun, like a blast of Ramones done by Aussie cavemen  and no, its not the Batman theme, its just about him.
The only complaint I have with this album is that its a bit short at 33 minutes, but at the same time its a great compact album, and with 14 great songs you could also say the length is just right.

begins the album with furiously strummed bass, simple razor guitar slashes, and pounding, relentless drums. Its about what you gotta do to suck suck suck suck-seed, a venomous punk splatter thats very clear about not wanting to do any of those things.

X (Australia) - Turn My Head/Good On ya Ba

still a good track, with interesting guitar wrenching going on in the background from Lucas.

features a wicked lurching off-kilter funky bass riff underpinning a song thats about just wanting to stay in and not go to the disco or the pool hall, with weird tape-warpings being used on some of the vocals to great comic and musical effect.