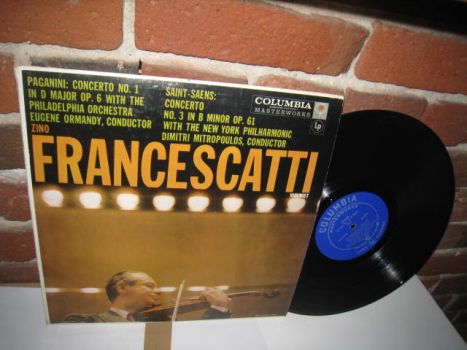 Skip to the beginning of the images gallery
Details
Zino Francescatti - Paganini No,1/ Saint-Saens Violin Concerto

A1 Paganini - Violin Concerto No. 1

Even though the third (and last) of Saint-Saëns' violin concertos seems to impose fewer technical demands on the soloist than its predecessors, its melodic invention and impressionistic subtlety present significant interpretive challenges. This stress is most notable in the second movement and the chorale of the finale, which is reminiscent of the conclusion of the Fourth Piano Concerto. Possibly because of this, the Sarasate concerto along with the Introduction and Rondo Capriccioso, Op. 28, and the Havanaise, Op. 83, have endured as the major concertante works for violin by Saint-Saëns still heard regularly today

Francescatti is often forgotten in the US because of his frequent stays in his native France and his Italian heritage, but surely ranks among Milstein, Stern, Kreisler, Elamn and others in terms of the great violin interperters of this century. While Heifetz brught the level of violin playing to a new, unforgiving level, Francescatti proved that one could have flair and unending warmth without sacrificing technique.

Saint-Saens, whose popularity was practically due to Francescatti's performances. These recordings should not be the only performances of these pieces in a library--becuase of Francescatti's personal interpertation--but they might be the most expressive. In my opinion, Heifetz was unquestionably the best violinist of the cenutry, while Francescatti is who I enjoy listening to the most.

The Violin Concerto No. 1, Op. 6, was composed by Niccolò Paganini in Italy, probably between 1817 and 1818. The concerto reveals that Paganini's technical wizardry was fully developed. Contemporary audiences gasped at the extended passages of double-stop thirds, both chromatic and in harmonics.
Exquisitely beautiful performance with highest technique..
Interestingly, Francescatti was one of the few (only?) great 20th century virtuosos who did NOT study with a famous teacher or school. His talent was prodigious and, on many concerti, his interpretation is my favorite.