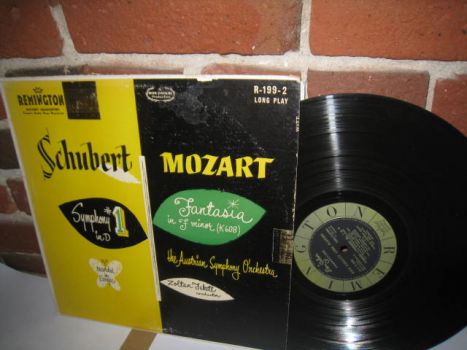 SCHUBERT - Symphony no. 1 in D


The Symphony No. 1 in D major, D. 82, was composed by Franz Schubert in 1813, when he was just 16 years old. Despite his youth, No. 1 is an impressive piece of orchestral music for both its time and size. The first movement opens with a stately Adagio introduction, reminiscent of the Haydn's 104 in its format. The short Adagio sets off a lively Allegro vivace.

The symphony is scored for 1 flute, 2 oboes, 2 clarinets in A, 2 bassoons, 2 horns in D, 2 trumpets in D, timpani and strings. The orchestration, which is balanced between strings and winds, lends itself to small chamber orchestras, as well as larger ensembles. The trumpets are scored particularly high, as in many of Schubert's early works.

In 1950 producer Marcel Prawy asked Viennese conductor Bernard Paumgartner to make recordings for Remington and as a bait Prawy mentions the contract he has for making recordings with the Mozarteum Orchestra of Salzburg which was eventually conducted by Joseph Messner. However, Prawy did not mention the name of Zoltan Fekete, the Hungarian conductor who conducted the Mozarteum on several occasions, but whose biography remains an obscurity. Zoltán Fekete was not a specific Remington artist in the sense that Kurt Wöss, H. Arthur Brown, Joseph Messner, or later Thor Johnson was.

Information about Zoltán Fekete is very scarce, in fact it is practically nonexistent. Encyclopedias do not mention the man. Grove's does not have an entry on Fekete. And liner notes on the LP releases often merely mention his name and only in two cases one or two facts which may allude to an existing biography. On the Remington cover of Bruckner's Symphony No. 3 on R-199-138 there are just a few lines which indicate that Zoltán Fekete came to the US, apparently just before World War II, and that he must have obtained American citizenship:


"(This) American-Hungarian conductor first penetrated the musical consciousness of New York through a series of concerts with the Midtown and New York City orchestras."

After the war he returned to Vienna as Wanda C. Von Rudolph writes on the back of the cover of Colosseum CLPS 1012 with Suites of music by Georg Friedrich Handel arranged and conducted by Zoltán Fekete:


Zoltán Fekete to whom we are indebted for the suites presented here, conducted this performance with the Vienna State Symphony Orchestra. A Hungarian by birth his musical education includes study in the Budapest Academy of Music and in Vienna. Mr. Fekete has devoted a great deal of research to the final period of Handel's creations. In his arrangements he has kept faithfully to the original melodies and harmonies, transposing them into forms which are easily understandable today. Mr. Fekete is also a composer, one of his compositions on another Colosseum record is his "Caucasus Ballet Suite" (CLPS 1011). Other numbers conducted by him are : "Snow White Ballet Suite" (CLPS 1011), and the "Grand Duo Opus 140" arranged by Fritz Oeser as the "Gastein Symphony" (CLPS 1013) also Bartok's early work (1905) - First Orchestra Suite, opus 3 (CLPS 1010).

Zoltán Fekete is arranger of Mozart's Fantasy and of Suites by Handel. He conducted works by Bartók, Bruckner, Mahler and Tchaikovsky, and he is the composer of Caucasus Ballet Suite and Snow White Ballet Suite.
.


Zoltán Fekete was born on July 25th, 1909, in Budapest, Hungary. He studied with Zoltán Kodály and Béla Bartók in Budapest and later in Vienna. The recordings of Zoltán Fekete are not many. They have been released in various countries on different record labels. Reviewers were not always appreciative of his conducting. I suspect that the poor technique of most recordings led to this opining. Some of Fekete's performances show that he certainly had the needed authority to lead an orchestra in an inspiring way. He surely did not have the wish to build a career solely as a conductor forcing him to lead performances of an extensive repertory with many different styles.

Apparently Fekete was the man who preferred to appear from time to time in front of an orchestra, would arrange works from others and would compose orchestral scores of his own. How many works he wrote in total is not known. Also the exact date of his passing away is not found. But Teri Noel Towe told me that Fekete died in the late 1970s. He was living in Munich. His wife was Alma Hoehn, the legendary dealer in collectable 78 rpm shellac records and vinyl LPs. She died around 1988.
More Information
Please sign in with your email address or Create an Account.
New Products
Compare Products
Compare
Clear All
You have no items to compare.
My Wish List
Last Added Items
Go to Wish List
You have no items in your wish list.
Vinyl Records Vancouver
Categories
Help
Quick Link
Newsletter