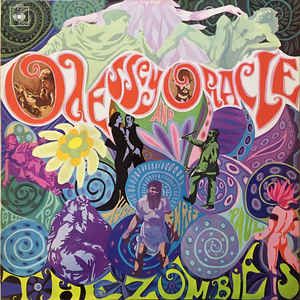 "Be not afraid;
The isle is full of noises
Sound, and sweet airs that give delight and hurt not.
Sometimes a thousand twanging instruments
Will hum about mine ears; and sometimes voices"
(Shakespeare)


I know I will face opposition from "Sgt. Pepper" fans on this point, but I have argued for a long time that the 2 most important pop lps of the 60's are the Beach Boys' "Pet Sounds," and its most obvious cousin, the Zombies' "Odessey and Oracle."


There are many reasons for my stance on this, but the most important reason is the album itself. Unlike "Pepper," which even Lennon put down in his later years as being uneven, "Odessey and Oracle" is a beautifully constructed lp of majestic beauty that is years ahead of its time.

It's somewhat unfair to call it a "psychedelic" lp for the same reasons that Love's "Forever Changes" isn't quite psychedelic.
Both lps transcend categorization. For every "Hung Up On a Dream" (arguably Rod Argent's finest 3 minutes- I call it Rod's "Good Vibrations"- listen to the 2 tracks back to back..both 3 minutes...amazing similarities) there is a glorious "Beechwood Park" or "I Want Her She Wants Me."

Chris White (his songs the true beneficiary of the late 60's technological progession and more overtly influenced by psychedelia than Argent) and Rod Argent proved time and again on this lp that they were master songwriters and musicians of great majesty, with White's progression as a songwriter startling. As was true for the band throughout their brief tenure, they were willing to take great chances on their tracks. Their obvious understanding and tasteful, proper use of the mellotron, is the pre-cursor of the 70's Progressive sounds; the use of backwards tape loops makes White's harrowing "Butcher's Tale" all the spookier. And those harmonies! Colin, Rod, and Chris created among the finest 3 part harmonies ever made. Accentuated, as always, by the pure competency of Colin Blunstone's empassioned vocals, Paul Atkinson's (very underused, alas) guitar, and Hugh Grundy's always rock-steady drumming, White and Argent could flourish, and did.


The mono versions offer brilliant insight to the band's strengths as musicians and vocalists, while the stereo offers the brilliant production as well as the effects that make this lp as special as it is. An absolute must have gem of the highest order.


This was a cutting edge song from of of my favourite bands of all time, I may have been born a few generations late but it's great we can all enjoy it..


The Zombies - Time of the Season

one of the best albums of the psychedelic era, and this little tune always catches me off guard due to its blatant simplicity - the sound is interesting, yet ordinary, but the message is brilliantly stated...

this song is so underrated..